Investors enjoyed a nice rally as Fed rhetoric suggested a less hawkish policy path. The rhetoric was backed by Nick Timiraos, a Fed pundit, who published an article in the Wall Street Journal that indicated the Fed would raise by 75 basis points at the November meeting and then raise by less in December. 3rd quarter earnings also helped sentiment. Robust reports from Goldman Sachs, Bank America, ASML, IBM, United Airlines, and Verizon induced a wave of buying.  However, stalwart Tesla disappointed the street with a lackluster earnings report.  In Europe, Prime Minster Liz Truss announced her resignation six weeks after taking office.  The news sent a bid into UK stocks and bonds, which further helped investor sentiment.  Morgan Stanley’s Investment Strategist, Mike Wilson, who has been bearish for most of the year, also bolstered sentiment after he told investors that the market could rally in the short term to 4175. Also of note was the Biden Administration’s decision to release another 15 million barrels of oil from the Strategic Petroleum Reserve and its announcement that the US would impose further technology export restrictions on China. 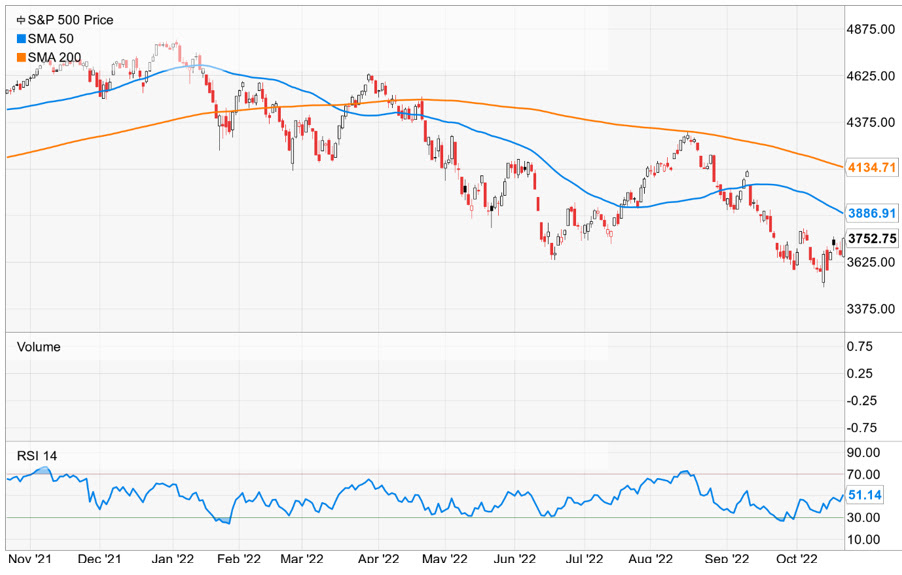 The economic calendar showed some resilience in the housing market.  Housing starts increased to 1439K versus the street’s estimate of 1425k.  Building permits also came in better than expected at 1564k.  Existing home sales cooled a bit, coming in at 4.71 million as weekly MBA Mortgage applications fell by 4.5%.  Initial jobless claims came in at 214k, while Continuing Claims increased to 1385k.

Investment advisory services offered through Foundations Investment Advisors, LLC (“FIA”), an SEC registered investment adviser. FIA’s Darren Leavitt authors this commentary which may include information and statistical data obtained from and/or prepared by third party sources that FIA deems reliable but in no way does FIA guarantee the accuracy or completeness.  All such third party information and statistical data contained herein is subject to change without notice.  Nothing herein constitutes legal, tax or investment advice or any recommendation that any security, portfolio of securities, or investment strategy is suitable for any specific person.  Personal investment advice can only be rendered after the engagement of FIA for services, execution of required documentation, including receipt of required disclosures.  All investments involve risk and past performance is no guarantee of future results. For registration information on FIA, please go to https://adviserinfo.sec.gov/ and search by our firm name or by our CRD #175083. Advisory services are only offered to clients or prospective clients where FIA and its representatives are properly licensed or exempted.