It was a mixed week on Wall Street that saw continued quarter-end rebalancing that supported pro-cyclical issues and hindered mega-cap growth issues.  For the week, the S&P 500 gained 1.6%, the Dow added 1.4%, the NASDAQ declined 0.6%, and the Russell 2000 gave back 2.9%.  The S&P 500 and the Russell 2000 breached their 50-day moving averages during the week.  The S&P 500 was able to find support and trade above the 3873 level while the Russell struggled to regain the 2290 level.  The 2-year note yield fell one basis point to 0.14%, while the 10-year yield in whipsaw trade fell seven basis points to 1.66%.  Gold prices fell $9 to $1732.50 an Oz.  Oil trade for the week was again quite volatile as investors ascertained the ramifications of the Suez Canal blockage on the commodity.  WTI closed down $1.44 to $60.99 a barrel.

There was plenty of corporate news on the tape this week, which started with the announcement that railroad Canadian Pacific will acquire Kansas City Southern in a cash and stock deal worth $29 billion.  Other corporate news included Intel’s report of a $20 billion investment in a new fabrication facility in Arizona and news that AstraZeneca’s vaccine was not as effective as initially thought. 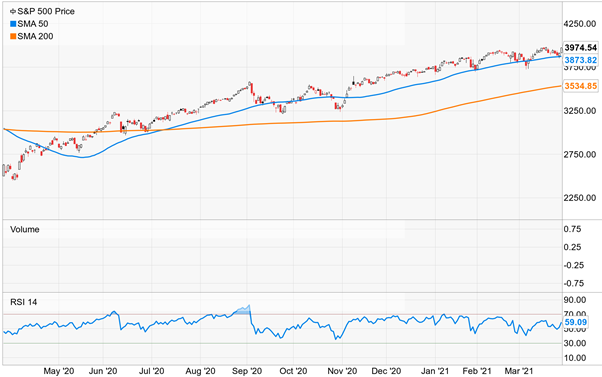 News of extending lockdown measures in Germany and the Netherlands dampened market sentiment even as vaccination protocols in the US were broadened to include more age groups.

Economic data for the week was better than expected.  The final reading of the University of Michigan’s consumer sentiment index was the best in a year coming in at 84.9 versus expectations of 83.6. Initial jobless claims were lower by 97k to 684k, the lowest level since last March.  Continuing Claims fell 264K to 3.87 million.  February Personal income fell 7.1%, slightly worse than the expected decline of 7%.  Personal spending came in at -1% versus the consensus estimate of -0.7%.  However, interestingly the February savings rate fell to 13.6% from January’s 19.8%.