The financial markets were in consolidation mode as a volatile risk-off trade in cryptocurrencies exacerbated concerns about inflation and valuations.  A sell-off in commodities curbed investors’ appetite for cyclicals while growth sectors found some reprieve.  First-quarter earnings announcements continued to surprise, but price action was mixed.  The Federal Open Market Committee minutes were released but were a non-event.  The minutes did suggest that some members were open to tapering the current asset purchase program later in the year.  Economic data was mixed for the week. 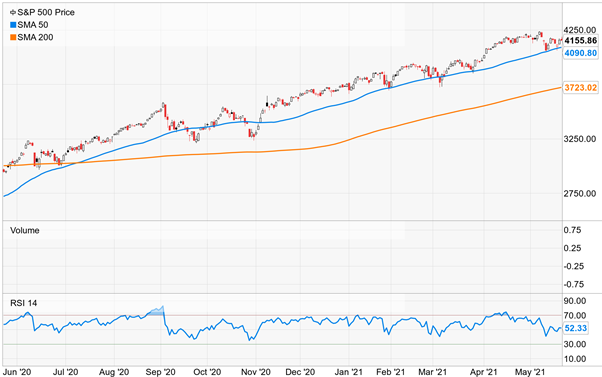 At first glance, it appears that the market action was somewhat muted last week. However, the activity underlying the major indices saw selling in the most recently favored cyclicals.  Financials, Energy, Industrials, and Materials sold off while Real Estate, Utilities, and Consumer Staples outperformed.  Lowes, Home Depot, and Macy’s all had solid Q1 earnings reports but sold off after their announcements.  Walmart, Target, and Palo Alto Networks also announced solid results but were awarded higher prices.  Cybersecurity issues were well bid on the week after the administration announced new initiatives to address ransomware attacks.

Bitcoin and other cryptocurrencies sold off hard over the week in very volatile trade.  The Chinese government announced that they would increase regulations on crypto and curb crypto mining initiatives.  Bitcoin fell as low as 30k before a rebound to 38k on Friday.  Some pundits fear the move portends further risk-off action in the broader market.

Economic data was mixed.  Housing Starts decelerated in April, falling 9.5% on a month over month basis or an annualized rate of 1.569 million.  Building permits rose 0.3% to total permits of 1.76 million.  The slight increase may be due to the higher costs facing builders, namely, land, materials, and labor.  Initial Jobless Claims fell 34k to 444k, another low post-pandemic.  Continuing claims regressed about coming in up 111k to 3.751 million.  The Conference Board’s Economic Index came in better than expected and showed solid results in the leading indicators.  IHS Markit Manufacturing and Services were both better than expected at 61.5 and 70.1, respectively.